I had a lot of fun a couple of weekends ago at the Big Bang Data exhibition.  It claims to show “how the data explosion is transforming our world”, and if it doesn’t manage quite that, it’s certainly worth a visit.  It’s on in London and its run has been extended to 20 March – not surprisingly, as it was packed out on the Saturday afternoon I visited.  Its website has lots of materials on things that are in the show if you can’t make it to London. 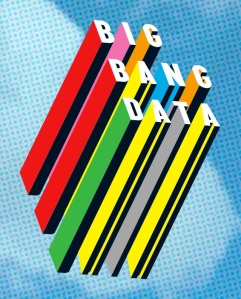 There’s lots to say about it.  After a couple of artist installations to kick things off (Timo Arnall‘s Internet Machine and Ryoji Ikeda‘s gorgeous, entrancing Data.tron – and We Need Us by Julie Freeman is installed towards the show’s end), the exhibition was divided into zones that reflected pretty accurately a number of current academic ways of thinking about digital data: the materiality of ‘the cloud’; the ‘quantified self’; the massiveness of ‘big data’; ‘data for the common good’, looking at participatory uses of data and digital devices; ‘data is beautiful’.  Each zone was full of examples of different kinds of engagements with digital data, by artists and designers and activists, and there were also a few (rather gestural) citations of earlier, pre-digital examples of images doing apparently similar things.  There was also a massive ‘London Situation Room’, with a number of very large projections of various data streams from the city by Tekja, as well as two consoles with interactive screens of various kinds. 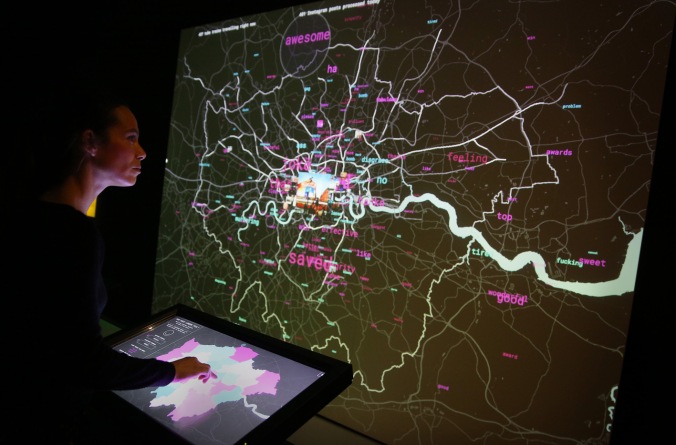 The variety was fascinating.

However, the variety also served to obscure what I felt by the end was actually a rather uncritical approach to digital data.

Firstly, there was that very close match between the zones of the exhibition and current discussions about such data.  I suppose I go to exhibitions to be surprised by what artists and designers do differently from me, and although that’s often frustrating (especially when artists do ‘research’), I was a bit disappointed not to be more surprised than I was about the exhibition’s contents.  There was no suggestion, for example, of any other power dynamic at work in big data than that of ‘communities’ (who use ‘participatory’ digital methods to get people using digital data for that ‘common good’ – hooray) versus government (the NSA specifically, maybe GCHQ) and some unnamed corporations who do bad things with data like surveillance (boo).  Jonathan Harris‘s painting Data Will Help Us was a good example of this kind of binary approach to power.  The idea that ‘participation’ and the ‘common good’ might be problematic processes and concepts, or that local anti-immigration groups might use digital data, or that there are other forms of power other than doing things with data, was left entirely unaddressed.  (Though an honourable mention should go to Erica Scourti here, whose Body Scan piece broached questions of the construction of gendered identity via online image searches.)

Second – and to rehearse my usual bugbear about things digital – the show had four videos of ‘experts’ discussing various aspects of digital data and of the ten talking heads interviewed, eight were men.  Several appeared in more than one video.  Of the two women who got a look in – both Spanish, interestingly (the exhibition originated in Barcelona) – one appeared in two videos and the other in just one.  And both appeared in the video discussing the importance of human values and subjectivity in relation to working with data.  Hey ho.

Finally, and perhaps more surprisingly, I didn’t really get a sense from the exhibition that the whole notion of data itself was problematised quite as thoroughly as it deserves to be.  Rob Kitchin strips ‘data’ back to its basics in his book The Data Revolution, when he points out that data are “raw elements that can be abstracted (given by) phenomena” (page 2).  Most of the work in Big Bang Data seemed to accept the formats in which big data is generated and the categories through which it is organised, and to focus on doing things with it.  This was particularly true in the London Situation Room, where Transport for London data mixed with geolocated Instagram posts with nary a comment on how these things are different. 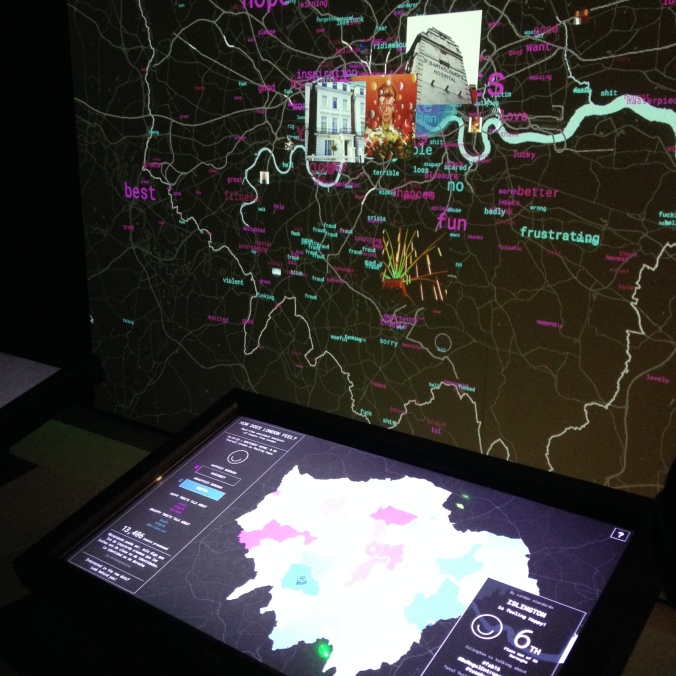 There was generally very little engagement with the construction of data itself – including its errors, failures, bugs – I know it’s rather passe, but there was no glitch art to be seen, for example, or work focussing on how most data has to be ‘cleaned’ before it becomes usable.  The exception to this was the Dear Data project by Giorgia Lupi and Stefanie Posavec.  These two artists sent a series of postcards to each other over the course of a year, each of which carried hand-drawn counts and symbols of things they’d done: not only was the crazy number of possible things that can generate ‘data’ made evident, so too was the process of converting that data into signs.  It was a great intervention and exceptional in the way it didn’t take ‘data’ as ready-made. 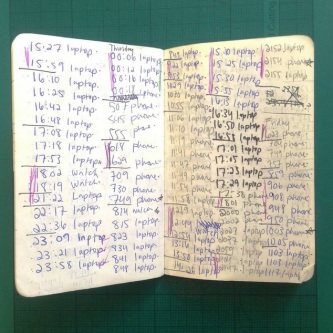 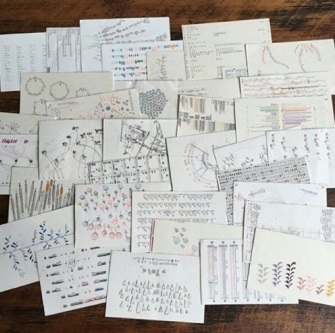 So while I kind of share the exhibition’s enthusiasm for the scale and richness and possibilities of big data, and I really enjoyed most of the exhibits (and it was great to see an exhibition with so many screens all actually working smoothly!), I wanted a different kind of variety, in the end.  Particularly because one of the things I noticed in several of the rooms with installations was that visitors wanted to be pictured with the artwork projected over them – they stood near walls and asked friends to photograph them as datastreams and code played over their bodies.  That is, they seemed to get just how much digital data is shaping who we are, now – and that being the case, it would have been great if Big Bang Data could have been a bit more wide-ranging in thinking through the production of data itself. 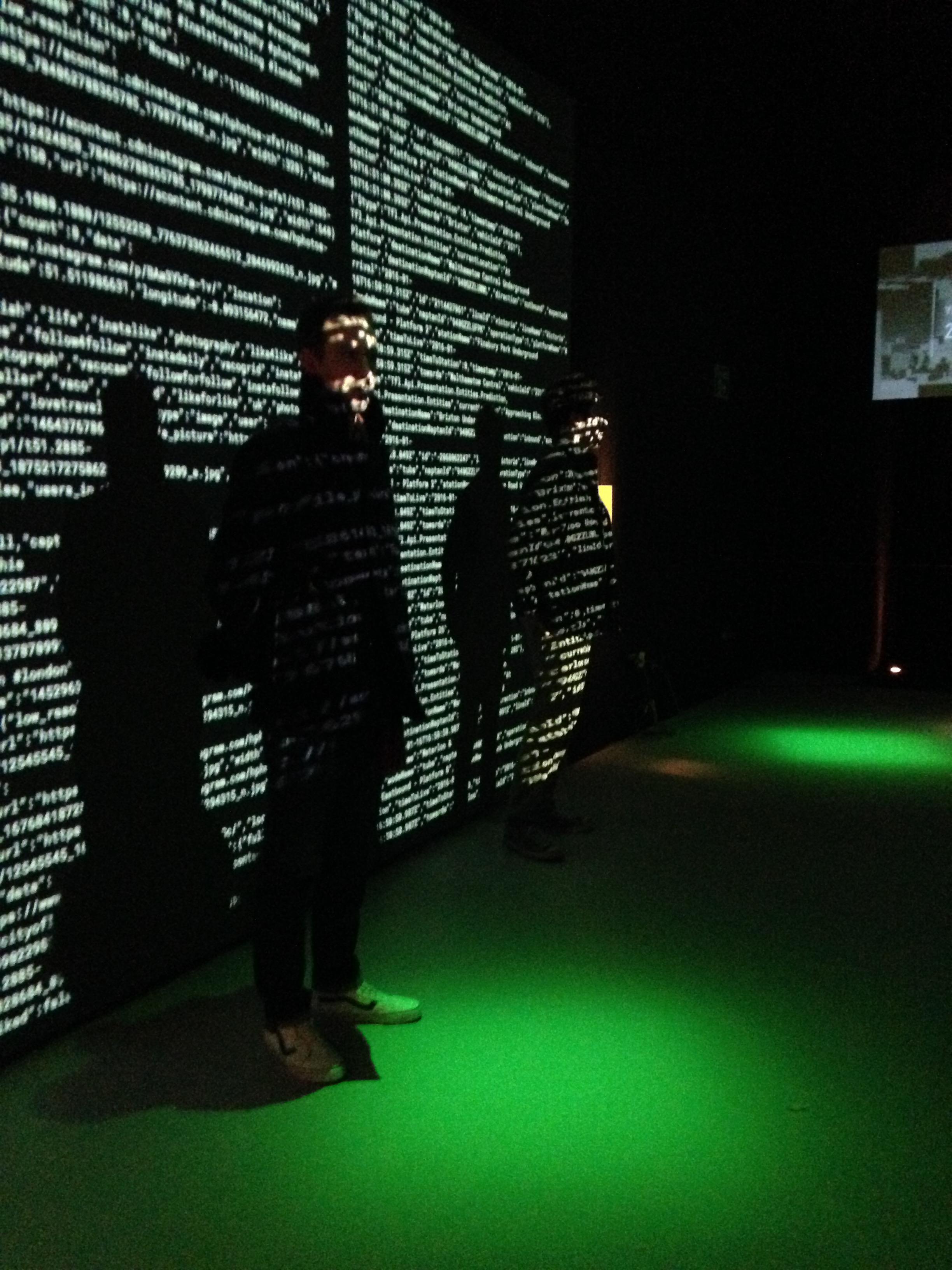 This blog is about how people make and encounter visual images, and what happens in those encounters (that’s what I mean by visual culture). I’m interested in both everyday doings (things like selfies, for example) and the more specialised ways in which more and more social scientists are using images as research tools (that’s what I mean by visual research methods). I’m also particularly interested in how digital technologies are part of those encounters. There are also occasional posts about academic skills.