I spent a very interesting day a couple of weeks ago at the MK Future Cities conference, held at The Open University in Milton Keynes.  It looked to me like there were well over a hundred people there, mostly policymakers, businesses and various organisations with an interest in this thing called a ‘smart city’. Milton Keynes is a city with a lot of ‘smart’ stuff going on, and the day kicked off with a great talk from its council’s Director of Strategy on what’s happening and – more importantly – why and how it will matter to the city and its inhabitants.

Definitions of ‘smart cities’ proliferate (and indeed there is some muttering that the term is now past its sell-by date), but they’re generally understood to use data produced by digital technologies to do three things: enhance their sustainability by encouraging more efficient use of resources; increase their economic growth by innovating new products and markets; and become more open by enabling greater citizen participation in city governance.  I’m interested in them because, as I’ve posted about before, visualisations of different kinds are key to the smart city phenomenon. They proliferate as advertisements for selling smart city kit, they’re an important way of communicating ‘smart’ as an idea (and of course, these two things are often overlap), and visuals are also crucial to how smart cities are managed especially but not only in the form of the online data ‘dashboard’ (which are getting some attention now, with excellent recent discussions by Rob Kitchin and Shannon Mattern). 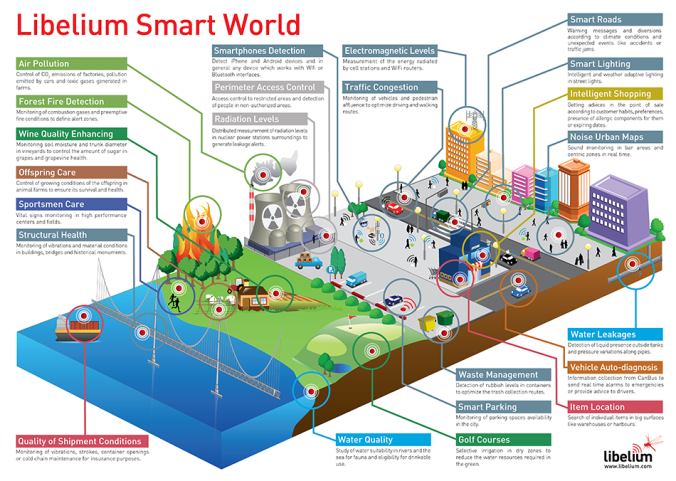 Smart cities are also proliferating – over half of UK cities claim to be smart, apparently – and so it seems important to think carefully about what sort of urban life they are offering.  I think right now that’s an open question.  There’s a lot of big corporations involved in selling smart city control-and-command centres, but there’s also a fair bit of discussion about how smart tech can also be designed and used by ordinary folk, for all sorts of ends other than profit.  (There’s a nice essay in First Monday exploring those latter possibilities, for example, from the Mobile City peeps Michiel de Lange and Martijn de Waal.)

From what I could gather of the make-up of the speakers and audience at the FutureCity event, it was pretty representative of who is driving the development of smart cities in the UK: local councils, tech enterprises small medium and large, and a bunch of other kinds of organisations, including universities, the UK-government-funded Catapults and a range of various interest and/or campaigning groups.  There were very few designers or architects; very few third sector organisations; and, bar one behavioural psychologist, no social scientists on the panels.

As a social scientist, though, various things struck me about the day, particularly about how social differences were – or were not – addressed.  Various thoughts follow.One striking thing about the day was the way in which almost every speaker began with some kind of statistics and visuals about urban population growth. This was the starting point for nearly everyone: cities are growing, the proportion of the world’s population living in cities is increasing rapidly, and this is going to be a massive problem for urban resources and infrastructure.  The other demographic trend repeatedly mentioned – often personified by the speaker’s grandma – was that the world’s population is also ageing rapidly, which was also generally assumed to be an almost equally massive problem in terms of future healthcare provision.  While neither of these facts are wrong, it did strike me that the way in which they framed every presentation, to the exclusion of any other kind of demographic, must surely be shaping the discussion of smart cities in quite specific ways.  What would happen to the debate if speakers started from other kinds of demographic information – the number of adults with caring responsibilities, for example?  Or the number of people sensitive to electro-magnetic fields?  And then we might also reflect on the fact that thinking about the social situations in which smart cities are embedded only in terms of the numbers of people and their resource requirements is also a pretty specific understanding of people, let alone cities.

Which leads me to my second comment about the day.  As I’ve said, most of the speakers talked about the inhabitants of smart cities in terms of population growth and ageing.  But there were also three other ways in which they were described: as ‘users’, as ‘citizens’ and, less often, as ‘publics’.  Each of these has rather different connotations, and Jennifer Gabrys has recently written a great paper on the ‘smart citzen’.  What they all share, though, is a kind of abstract, empty quality.  Both ‘citizen’ and ‘public’ appear in Western political discourse as (in theory at least) forms of social identity that anyone can occupy, regardless of their gender, class, religion, sexuality, race and so on.  The genealogy of ‘user’ is more diverse: it emerged in the academic discipline of cultural studies as a reference to the ways in which different people actively engage with media in different ways but in smart tech discussions it seems to be used simply to refer to the human bit of the human-computer (or app) interface, implicitly being reduced to various cognitive functions in the process.  None of these terms – citizen, user, public –  address the fact that people are different in all sorts of ways.  So while lots of the speakers talked about the importance of starting from the citizens of smart cities, none really addressed how social differences – like class, gender, able-bodiedness, and any number of others – might shape how smart tech finds its place in already-existing cities.

Now, the very first thing that struck me about the MK:Future City event (and the other smart city events that I’ve been to) is how male-dominated they are.  I guess around 80 per cent of the participants were white men in suits.  Mostly grey suits.  So smart cities seem to be being planned and created almost entirely by men.  Now, I have to be careful here.  Clearly, the fact that the technologies and policies that are being lauded as the saviours of our cities are apparently being created (mostly) by just one section of the population may not necessarily be significant in any way whatsover – especially if they all love their grandma and care about how smart tech can enable her to live a better life even when she’s less mobile.

But, contrariwise, I would suggest that there is evidence that suggests it may be having an effect on the kinds of smart visions that are being created, viz., the use of those empty and abstract categories to describe the people who are going to be living in smart cities and using smart tech.  Those categories are only really credible, perhaps, if you never have to think about your class or gender or race, because you occupy a position of relative privilege.  (Yes guys, I know it’s complicated.  But how is a woman with a baby and a toddler and week’s worth of shopping supposed to use a driverless pod?)  They are also only credible if you’ve never read any of the critical theory work that points out that the rhetoric of the ‘citizen’ and the ‘public’ being positions open to anyone to occupy ignores the fact that, in practice, those positions have been profoundly classed, gendered and racialised (and seem now to be being ‘religion-ised’ in much of the Global North too).  Hence my suggestion that discussions of smart cities need some social science input.

But I’m afraid the behavioural psychologist didn’t help much here.  Her contribution was to offer the acronym WIIFM – wiffem – as a way of understanding why people adopt, or don’t adopt, technologies.  What does WIIFM stand for?  ‘What’s in it for me’.  Yes, really.  To be fair, she did also comment that reducing human motivation to WIIFM might make people sound rather selfish.  But selfish doesn’t quite cover it. WIIFM also suggests people are single units unencumbered by any other responsibilities  (it isn’t WIIFTPIL, for example – what’s in it for for the people I love), that the human actions are based on cost-benefit-analysis of the crudest kind, and that the outcomes of decisions are fully understood.

Let me be clear: I find smart city discussions really interesting and exciting.  This is the future, after all, being made now, at a moment of extraordinary technical change the implications of which are barely emerging.  (John Lanchester has a great essay on this in the last issue of the London Review of Books.)  So it’s particularly disappointing to have to be going back to some pretty old feminist arguments – several of which I drew on for my book on Feminism and Geography, which came out in 1993 – and make these points.  But they have to be made, or the future in some pretty fundamental ways is going to look a lot like its past.  And this requires social scientists to start engaging with smart city discourse and technology.  Not simply dismissing it (as a recent blogpost by Andy Merrifield has done) because it’s all corporate capitalism, but thinking carefully about – and insisting that – smart tech is complex and diverse, that the organisations and people creating and using it are also various, and that its effects in the world are therefore going to be more unpredictable than IBM et al assume.

I should end by acknowledging that this this post has taken a very belt-and-braces approach to the question of how smart city discourses are excluding discussion about social difference.  I haven’t got complicated about what sorts of social differences might matter more, or less, in different kinds of smart cities; and I haven’t touched on what sorts of social (and cultural) theory might best help us address the relation between smart tech and urban social formations (though I reckon a sort of more-than-usually-socially-sensitive Science and Technology Studies might do it best – discuss).  And of course there’s some great scholarship already out there that’s helpful for thinking more about all this.  I’ll be sharing some of the work I’ve found really inspiring in my next blog post

This blog is about how people make and encounter images, and what happens in those encounters (that’s what I mean by visual culture). I’m interested in both everyday doings (things like selfies, for example) and the more specialised ways in which social scientists use images as part of their research (that’s what I mean by visual research methods). There are also occasional posts about academic skills.

My Tweets
Join 8,877 other subscribers